It is Sara’s birthday today, my beloved wife.  Before I ever laid eyes on Sara, we had talked on the phone about 4 times.  She was in Moline, IL and I was spending a long weekend in Des Moines, where I worked in the intensive care unit at Mercy Capitol Hospital–the former osteopathic hospital and red-headed stepchild of Mercy Main.  Sara and I had been set up by her sister, Amy, who was pinch-hitting for her big sister in the game of life.  After a mere 40 minutes of talking with me outside of the State Farm office in Maquoketa, IA, Amy was certain I was the life-mate for her sis–“I just met the father of your children.  Don’t eff this up!” came the edict. 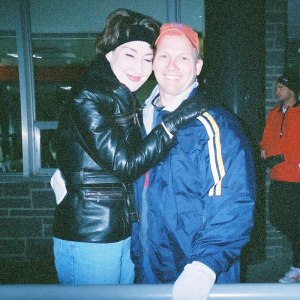 Before either of us knew it, Sara had quit a hateful job working for Cruella DeVille at a poisonous hospital in the Quad Cities and had become my personal groupie.  This was no easy task and has just grown more complex, more difficult, and more physically taxing since those early days.  I met Sara at the Border’s bookstore in Davenport on Tuesday, September 21st at 5:30 pm.  I was engrossed in the first pages of Ann Coulter’s Treason when a soft voice said “Erik?” A tall drink of water with brown hair and soulful brown eyes looked down at me as I sat there.  I had not imagined or dreamed about what Sara would look like–I was, however, in the mood for someone to be kind to me.  If she couldn’t muster that, our time together would be brief. 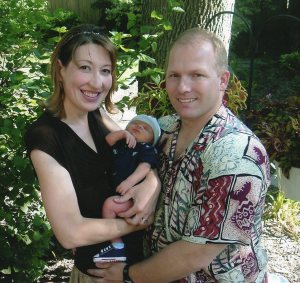 I was still reeling from the break up of my marriage to a woman who appeared to think of marriage like a complicated date–an exit strategy always in hand the moment things got hard.  Perhaps I even told Sara that I just wanted someone to be kind to me, and I wanted that more than anything else another human being could offer me. I had very fresh scars from my marriage, ones that if Sara was to win me over she would unfortunately have to tend…and nurture.  She got this. 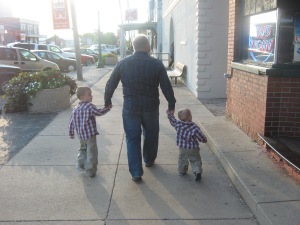 I remember our first argument.  I was perturbed with her and probably wanted my way.  I don’t even remember what the argument was over–I just remember the punch line.  I said “I sure hope you ski!”  As if this activity could save us, I might be willing to tolerate not getting my way if Sara could ski and would ski with me wherever I wished to go.  At that time, I had a matronly friend at the hospital who urged me to go on a vacation “just for yourself.”  I looked into skiing in South America, but the reviews on goski.com were horrible and echoed that the conditions were au natural and the accommodations poorly developed.  I had just recently met Sara and wasn’t crazy about going by myself.  Tuesday nights lessons at Chestnut Mountain in Galena, IL for six weeks with her future husband as instructor gave Sara the skills she needed to ski in Spain and Andorra.  KLM lost our luggage flying into Toulouse, France so we had to come up with a plan B that now excluded skiing in France.  We rented a BMW 525 xi and were left to tour the foothills of the Pyrenees for the day until our luggage caught up with us.  Poor us.  A couple of days later, a blizzard blew into the Pyrenees after the lifts had delivered us to Beret, Spain. Suddenly they closed the lifts for safety and we had no choice but to ski the 7 kilometers back to our resort in Baquiera. That evening we asked Spanish Sally, our hostess at the hotel, where there was a nice restaurant in the area.  She seemed to understand and replied “Ohh…romantica?!”

Sara and I married about nine months after meeting, in July 2005.  Each of us was old hat at the marriage thing, and knew what we wanted and had to have.  Our wedding was held on my brother’s farm, in a barn built in 1902 by my great great grandfather Andrew.  The temperature that day was about 78 F with a gentle breeze blowing, the sun filtering through the slats in the barn walls, and some of our city friends asking if we had piped in the sound of birds chirping outside during the ceremony.  We had a patriotic theme wedding, Famous Dave’s catered in (a huge hit with our guests), and we honeymooned in Cozumel a short time later.

Sara is once (Noah), twice (Jonah), and three times (Eli) a lady to me, giving me 3 strapping sons who will one day dwarf their “regular” dad. There is not a cooler woman on the planet to me.  I can be an ogre, a real grizzly bear to live with…yet Sara endures.  Sara looks on with disdain while our boys look at me like I am a rock star and often regard her as chopped liver, unaware or unconvinced of just how the magic really happens in the Hanson household. Yet Sara endures…being well, Sara.