During my high school years, I kept busy by bagging groceries at the local Rossing’s Fine Foods. My boss was a grumpy old fellow of few words who was as fiscally tight as the bark on a tree. I was paid a whopping $2.90 per hour (less than the minimum wage of $3.25/hr then) to bag groceries, stock shelves, and listen to the endless wit and banter of our 80-something year-old cashier, Hazel.  She knew every soul in town and the surrounding area, never missing an opportunity to subject a stranger to 20 questions if she did not recognize them.  Ruth was another cashier, a pleasant, portly woman who talked ad nauseum about her husband and children.  At least Hazel’s monologue was interesting.  The accountant for the grocer was a woman named Russie, a vibrant, passionate woman who also helped run a 90-head dairy farm nearby.  It was at Rossing’s where I came to know Russie and would later be asked to help out on the dairy farm, doing chores, cleaning calf pens, assisting with milking, taking pickup loads to the on-site dump, and mowing hay in the summer.  Many hours were passed pitching forkfuls of matted calf scours and straw into a manure spreader while listening to the Doors, the Rolling Stones, Kansas and other bands of that era.  Paint it, paint it, paint it black! One day my older brother and I were riding back into town with Russie, listening to the radio, when I started unwittingly bellowing “I want you to want me, I need you to need me.” My brother was embarrassed for me, he would later mention. During our junior year of high school, I asked Russie’s daughter Amy (also from the class of 1985) to homecoming court when our class elected me to the role of Duke.

Amy, the duchess, would many years later be know as “The Noah Whisperer” by my wife when Amy was able to get our oldest son interested in school in a way that no one else had been able to get through to him. 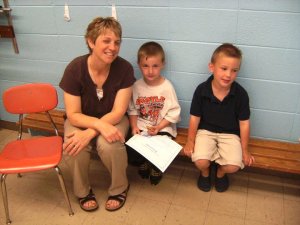 Had someone told me the day I graduated high school that I would spend my entire adult life in health care, serving others, I just would not have believed it.  On the spectrum from Selfish to Selfless, I was busy high-fiving Selfish while preening in the mirror with my free hand. After a seasonal stint at UPS as a sorter/preloader in Dodgeville, WI, I beat out 35 other guys for a $3.50/hr job as a psychiatric aide at the Garden Court Group Home in rural Lancaster, WI.  I was a criminal justice major at the UW-Platteville, with an eye on joining the FBI upon graduation.  After a year of A’s and B’s at Platteville, I became restless about being on the right path for me.  A chance meeting with my second cousin Rosann during her mother’s funeral in Argyle, WI, had me head out to Phoenix in April of 1987 to explore ASU and find a job.  After a month of floundering and becoming more homesick, I returned to WI for the summer.  My official move to Phoenix came in August of 1987, just as my next younger brother was graduating from Marine Corps boot camp.

Cousin Rosann suggested nursing as my new major since ASU’s criminal justice program seemed poorly developed.  I wrinkled my nose at that prospect since I was heterosexual, but Rosann reassured me that the notion was part of an old stereotype.  How else would I turn a four-year degree into a paycheck to afford graduate school?  I can be won over with logic, so I looked into the BSN program and my path was set. My first semester at ASU was spent being homesick and distracting myself with endless games of pool.  Did you know it is possible to get a 1.0 GPA and remain in college? After another bump in the road by the name of Marie Eicher, a Nurse Rachett type of an instructor who was all about squelching the dreams of young people, I was soon petitioning the Standards Committee for additional semesters in adult ICU, pediatric ICU, and Neonatal ICU.  I finished with the last four semesters on the Dean’s List and graduated with Sigma Theta Tau honors (the international nursing honor society) and the ropes over my shoulders to prove it. 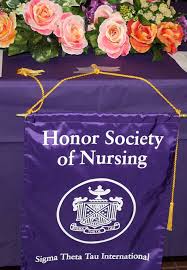 After sixteen years in intensive care nursing, I dabbled in the float pool caring for medical-surgical patients and came to know I really wanted to be in the emergency room, where all the action is.  Through the years, I had volunteered at the Ronald McDonald House in Phoenix, Special Olympics in Missouri, and for the church elderly.  One day in April, 2013 an opportunity came up to go to Haiti with a medical mission with a group called Schools4Haiti, started by an older gentleman named Len Demert from Cassville, WI.  Len had recently passed, but his daughters eagerly took up his cause in Haiti.  I found his daughter Penny easy to like and she and her sisters had been to Haiti enough to know how to navigate the country safely while still meeting the needs of the children in the orphanages. 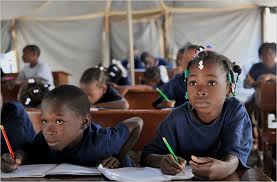 I suppose we all have our biases and mine tend toward lazy people and smoking, but hating someone for their skin color has always seemed simply stupid to me. I was called “ghost,” “whitey,” and “Casper” when I was young, to which I would reply “I am Norse–I’m supposed to be this color!”  Obviously, if I had any hang-ups about skin color, I would not immerse myself in Haiti.  Before I ever traveled to New York City for the first time, the best piece of advice I got was “just get used to streams and streams of people on the street–no matter what time of day it is.”  This advice also came to mind when I landed at Port au Prince. My brother, an ER doc, came along on the trip and we saw hundreds of orphans and members of the community on four separate days at four different locations. Some treated our arrival like a social event, eager to put on their Sunday best to meet the American team of nurses and doctors.

The pastor of my church is fond of saying that the only things you take with you to heaven is those which you have given away.  While I absolutely love foreign travel for it’s ability to expand my horizons, in one hundred years absolutely no one will know that Haiti was my 19th country I have visited since pulling away from my provincial roots. If my kin remember one thing about me a century from now, I hope it is that I was of a giving heart, always eager to help those who need it most.