I don’t know what I would have done right after high school if I hadn’t gone to college.  I was too hot-headed to go into the military back then and would have laid out the drill instructor breaking me down to build me back up (or died trying).  But I wasn’t ready to be in college right away.  I had a less-than-desirable childhood and little of it prepared me for being on my own.  Don’t misunderstand, I was ready to have a different identity, rather than the moniker placed upon me by my Argyle peers “Doug-Hanson-the-welfare-man’s-son.”  Crippled from years of emotional and mental abuse by parents and my peers, I was woefully shy as a young man first out on his own.  Looking back, I was actually handsome and very well built due to years of body-building. 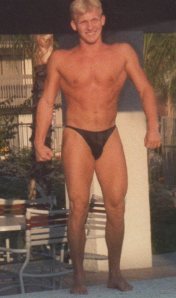 I attended UW-Platteville for my first year of college as a criminal justice major, my eye on becoming an FBI agent.  Before long I realized that career was incompatible with a stable family life, the only thing I wanted as much as being a college graduate.  I grew restless in Wisconsin and packed my Renault Alliance with all my earthly possessions and Dad, and made the trek to Arizona.  A few years later I was the Manzanita Hall Council President at Arizona State, an older student among the teens and early twenty-somethings.  Heads full of ham surrounded me.  One older gal stood out, not just because she was more mature, like me, but because of her blue eyes and long, wavy dark hair.  In the elevator one day, I finally summoned the courage to ask her out on a date.  “Hi, I’m Erik.  How would you like to go for some Thai food and see Isaac Stern at the Gammage Auditorium?”  To my delight, she smiled and said yes, then scrawled her phone number on a torn off piece of paper.

On a Wednesday night, I picked her up in my brother’s program car from work, a Pontiac Grand Prix.  I took Buffy to the Pink Pepper, a more classy Thai restaurant with white tablecloths and fine crystal.  The food was to die for–very exotic and yummy!  I was stoked.  I had a very attractive woman on my arm and a world renowned violinist to top the evening off.  I held the door for my date as we entered the Pink Pepper and the hostess soon led us to our table.  As Buffy looked around the establishment, I could tell that she had not been there before.  She seemed pleased, but slightly uncomfortable.  The moment the hostess walked away, Buffy said “Just look at that crystal!  I wish I had brought my bigger purse!”  I waited for her to laugh, or make any indication that this was just a really bad joke.  Nope, no such luck.  My heart sank.  I thought “oh, a classy dame!”

I don’t have a poker face.  It must have shown how truly disappointed I was in her and that comment.  I don’t remember anything she said after that.  When dinner came, I gobbled it up like a cowboy at the evening campfire.  Manners be damned–there was no one to impress here.  My quietness must have been disconcerting to her because half-way back to the Gammage Auditorium, Buffy or Tiffany or Bunny or whatever-her-name was, suddenly remembered that she had to study for her history mid-term that was tomorrow…on a Thursday!  What BS!  I happily drove her white trash buns back to the loop drive in front of Manzanita Hall, made a point of remaining silent as she got out, and then peeled away.

I was 23, handsome, had a nice ride, and had two tickets to a show that would be like no other.  I called up a few different friends, but all had something going on and could not join me for the show.  So I went to see Isaac Stern, front and center, all by myself–except for the few thousand other strangers who filled the seats at Gammage.  What a show it was!