Looking back, I don’t know what first possessed me to try my hand at bowhunting.  At that time my dad did not hunt, nor did my uncles or anyone else close to me, but I picked up a compound bow and decided to learn a lot of things by trial and error.  The first deer I ever took was a forked buck that I took in 1983 with a 17 yard shot to the aorta as he was on the trail of a hot doe.  I knew to draw the arrow back when his eyes were obscured behind a large oak tree, then wait for him to step out.  He ran 80 yards before finally falling.  I remember feeling a cacophony of emotion, including elation but also a sense of remorse, thinking “who the heck am I to take the life of this beautiful creature?”  The best way to honor my first deer was to make sure he went to good use providing nourishment to our family.  A few of my eight siblings ate venison along with me, but the rest preferred the no-kill type of red meat, neatly packaged under cellophane wrappers at the local grocer.  Since that first buck, I have taken about 100 more in the last 24 years of deer hunting.  Always a meat hunter first, I have only one trophy on the wall–a 153-class 9-pointer with a 22″ spread and main beams that are the circumference of my wrists.

forked buck
There are hunters out there who are better shots than I am and certainly there are those who spend a great deal more on their equipment. Two Christmases ago, my wife gave me a new deer rifle, a 7 mm Rem. Mag with a 3 x 9 scope mounted upon it.  It came in camo paint and I added a manly leather strap for a sling.  The rifle makes the hunter, I am telling you.  The first season I used it, I had only 3 opportunities on 3 does and took all three.  This past season I had seven opportunities and 7 fewer white-tailed deer graced my brother’s farm when I was done shooting, including one 8-pt buck trying to sneak along the fence line at 130 yards out.  I gave the rifle most of the credit for a super season.  Add in the 8-pt buck I took November 8th with my bow at 20 yards and I had my best season to date.  Yes, our party had that many tags.  Between us, we likely had 40-60 tags because our hunt falls in a Chronic Wasting Disease (CWD) zone.  The party put 14 deer on the ground, not bad for 10 grunts in the Orange Army. 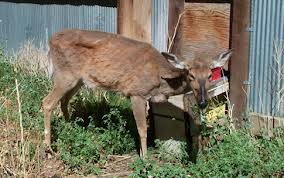 CWD-affected deer
Years ago we were stand hunters who hardly knew what to do with ourselves after being on opening morning stand.  We would linger back at the house, enjoying good food, libations, and fellowship. Then a random event changed all of that and our party evolved by light years.  One day about 14 years ago I was visiting my grandma Dorothy in Argyle, WI, up from my work as a House Supervisor at Kansas University Hospital.  I was sitting there one October afternoon, drinking in the quiet time in grandma’s living room as she drifted in and out of her afternoon nap on the davenport.  Uncle Sam came home and soon shook his finger in my direction and said “hey–whatcha doin’ right now?”  When I replied “nothing” he suggested that I take my bow and we would drive up to his 185 acres of woods where he would then attempt to ‘drive’ deer toward me by walking through his woods and chase them out the other end, toward me.  Clearly Sam did not understand deer, or deer hunting and how it is done.  The odds that I would get a deer with this proposed method approached the same odds of me bagging a deer by continuing to hold down the other end of the davenport in place with my rump.  However, touched that he cared about my hobby enough to do this for me I decided that it would be gauche to refuse his offer. 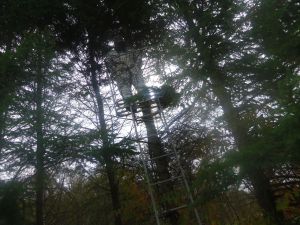 Skyline Camo
We drove to his acreage about 8 miles out of town and reviewed our plan.  I donned some of the most effective head-to-toe camo money can buy called Skyline Camo, developed by a hunter in New York state.  I picked a brushy ravine opposite of where Sam would start his deer drive and in the direction the deer would want to go, given the wind direction.  I made a point of asking him to wait 10 minutes before starting so I could be in position.  I had not been there very long at all, fumbling to get an arrow knocked when two does shot past me about 20 yards away, going at the speed of light.  I quickly finished readying myself and knocked an arrow, still in awe of the speed of those does.  Moments later four more does came tearing out of the woods on nearly the same path as those first two.  Until this moment I had never in my life attempted a shot of any kind at a moving animal.  I had never even considered it.  In an instant and in one fluid movement I swung my York bow up and sighted down the shaft of the arrow at the last of the four deer–a big doe.  As if I had done it all my life, I swung the arrow with her as she streaked in an arc about 20 yards from me, the tip of my broadhead pointed just behind her front leg, halfway between her back and her belly. At 225 feet per second–“thwunk!” the arrow reported, as I watched it disappear inside her–right where I had aimed it!  I was astonished that I took that shot–I don’t know what had come over me.  I was ashamed that I pulled back on a running animal–especially with a bow!  Yet I was simultaneously stunned and thrilled, knowing I would find her dead further down the ravine a few minutes later.  I swung back around and knocked another arrow in time to see two more does run out 50 yards away along the fence line, also going at Mach 7. I felt like an indian brave on horseback, arrowing a buffalo. 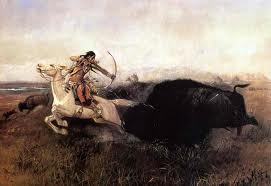 Uncle Sam emerged from the woods about 10 minutes later and said “see anything?”  “See anything?!” I shrieked excitedly.  “I saw eight deer run out of there like their tails were on fire and we’ll find one very large doe about 100 yards from here, lying dead further down the ravine!”  “No kidding?” Sam said, incredulously.  I replayed the last fifteen minutes for him, including how he started in too quickly and I wasn’t ready for the first two deer that ran out.  Then I thanked him profusely for what instantly became my most favorite, and most improbable hunt ever. When asked what he was doing while walking through the woods that startled the deer so effectively, he shrugged his shoulders and said he was listening to the Badgers football game, shaking a pebble in a can, and from time to time would stop and clap his hands real loudly. I tried to picture Uncle Sam, his six-foot-two frame, ruggedly handsome like Jed Clampett, portable radio laced around his neck with twine and britches held up the same way, an old PBR can pinched between his knees while he stopped to clap like a lunatic in the woods every few minutes. 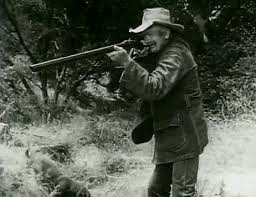 I recounted this story to my brother, my hunting buddies, and anyone else who would listen.  They most likely thought I was Loony Tunes, or exaggerating, but it really happened this way.  I implored that we needed to change our way of thinking about deer hunting.  We started shooting clay pigeons, not just because it is intense fun to turn the blaze orange clays into a cloud of gray dust, but also to train our hand-eye coordination on finding a target quickly and delivering a fatal blow.  All these years later, our group is some of the area’s finest sharpshooters, unafraid to knock them off their feet when they are running full bore.  My niece Sonja even tagged a running 8-pointer at 200 yards two seasons ago!  Some in the group have delivered a single, fatal shot to a running animal 300 yards out.  We began to study our ballistics, learning the muzzle energy and the energy remaining in the round out to 300 yards, the trajectory of the round, as well as the known minimum 900 foot-lbs of energy needed for a lethal shot on a grown white-tailed deer. By understanding the science that accompanies our passion, we have evolved as deer hunters to the point where our fun and our success is optimized.

Niece Sonja with her buck
My wife gets me.  Sara understands all of this, it’s importance to me, and my drive to instill this in our sons. When we met, I wanted to say one sentence that would help her understand who I am.  I said “for me, there are two times of the year: 1) deer season; and 2) all the rest of the year that I am looking forward to it! Deer season IS my Christmas.”